Rajasthan is one of the most beautiful states in India. Every city in Rajasthan has a royal, vibrant and colorful culture. 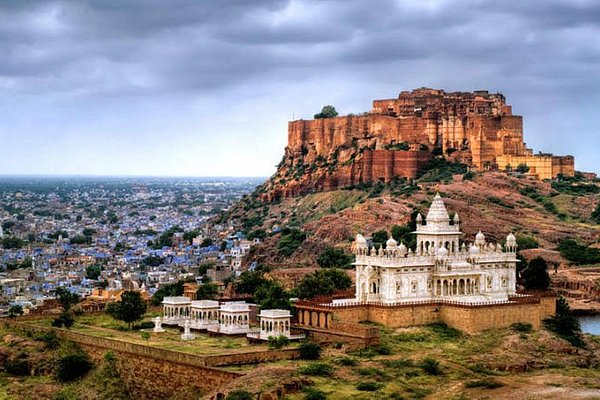 1.Jodhpur – Jodhpur very famously known as the blue City of India. You are surely going to be delighted on arriving to this royal heritage in Rajasthan. The has amazing food, rich Rajputana culture, intricate architecture and a lot more. Here is a list of must visit places in Jodhpur to take a good memory home. Jaswant Thada, Mehrangarh fort, Mandore garden, Umaid bhavan palace, Ghanta Ghar, Kalyana lake for a beautiful sunrise, Toorji ka Jhalra for architecture lovers, Rao Jodha desert, Rock park for Nature lovers, maid heritage art school, sheesh Mahal for a feel of royal luxury, Nagaur Fair for history and art lovers, Phool Mahal, Khejarla fort and Marwar festival for folk art lovers. The best time to visit the city is from December to February. The city is well connected by road, air and railway. plan the itenary for a week at least, otherwise you would miss a lot of attraction and beauty the place has to offer.

2.Udaipur – Everyone unequivocally loves Udaipur. The best time to plan the vocation would be from November to February. In order to make sure you have enough time to soak up as much of if as possible plan the trip for at least 4 to 5 days. Udaipur is one of the prettiest cities in Rajasthan. It is spread out across a series of seven lakes and surrounded by the green hilly Aravalli range. The city has plenty of nicknames. Its known as the white City of Rajasthan, the most romantic city in India, the Venice of the east and also the city of lakes. It is indeed a travel spot to be visited with your partner and be soaked up in the romance. Udaipur is full of glistening palaces, historic havelis, Ghats to watch the sunset. Let me list down a few must visit places of the impressive town. Jagdish temple, Udaipur city palace, a day trip to Chittorgarh fort which is about six hours drive from the main town. Dont forget to shop and collect souvenirs from the local artisans. At the time of departure you are sure to say – yes , it’s as great as everyone says. Udaipur is fantastic!

3.Jaipur – very commonly known as “the magical pink city of Rajasthan”. Jaipur is the capital of Rajasthan thus a very busy bustling city .It is a city which has a blend of old cultural heritage as well as new modern culture malls, bars and clubs. Jaipur is easily accessible by train, air and rail. The main attractions of the city are the magnificent’ Amer fort’ which is 15 kms before the main city, the elephantiasic sanctuary, the Jantar Mantar, the Hanuman temple, Nahargarh fort, Chokhi Dhani (an amazingly chill place),the bapu bazar for shopping the beautiful and brightly coloured bedsheets, Dupattas, Jotis, Jewellery and much more. The town will captivate you. Plan a trip four at least 5 to 7 days. You are sure to get lost in the rich culture and be nostalgic about the trip for days after. The local language and hospitality of the people will for take you down the memory! Go visit the city and feel it’s vibe.

4.Jaisalmer – Haven’t you been dreaming of those sand dunesand camel safaris of the Thar desert since childhood. Many Bollywood songs and movies have been directed in this beautiful desert city of Jaisalmer. The city is also known as the golden or yellow city which is kind of sandy in color. Don’t plan the trip during Summers as survival becomes difficult here due to the scorching heat. The biggest attraction is the kite festival during February, which has camel races and other fun activities. Must visit places are Patwon ki Haveli, Gadisar lake, city palace, sun set in the dunes, ancient market streets and much more . Jaisalmer in the western border of the country is well connected by rail and road.

5.Bikaner – Bikaner was founded by Rao Bhika and the Nehra Jats. Best time to visit is between January – February. Flooded with temples, forts and places the city is also known for its camel festival usually held in January to February. You will witness the most two important features of the city are usta and chadwa artforms of floral and geometric patterns. Major tourist attractions in Bikaner are Junagarh fort, Lalgarh palace, karni mata temple, Laxmi Niwas palace, Laxmi nath temple, Bikaner camel festival. The city is well connected by train, buses and car rentals. And not to forget the famous Namkeen, chips, sweets of Bikaner are a must take away.